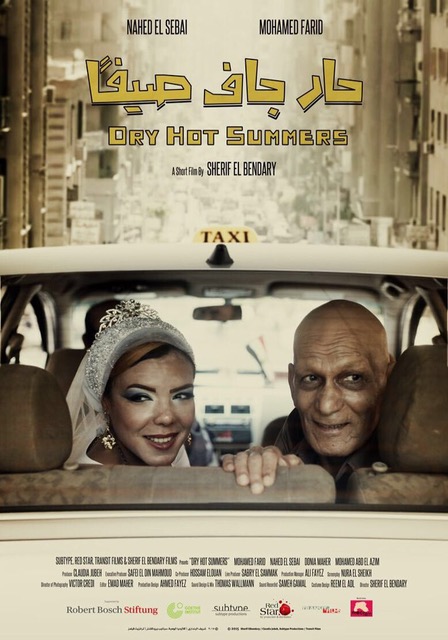 Frail old Shawky and bubbly young Doaa are two lonely people at opposite chapters of their lives
who accidently meet in a cairo taxi on a hot , dry summer day in cairo. their race throught the city evolves into a journey where each of them finds something in the other that reconnects them to life.

Sherif Elbendary, an Egyptian film director, writer and producer; born in 1978 in Cairo.

He graduated from faculty of applied arts in 2001 and started his life as a textile engineer; in 2002 he pursued another career path when he joined “The high Cinema institute” in Cairo to study cinema directing and graduated in 2007; where he got a teaching position from 2008 till now.

Elbendary directed a number of shorts and documentaries that made it to numerous festivals around the world. His first short film “Rise and shine” was produced by the national film center in 2006, the film was selected in many international festivals and won a number of awards including “Tribeca film festival” in 2007. In 2011, he directed a feature length documentary “On the road to Downtown”, and among other 9 other directors, Elbendary participated with “Curfew” segment in the feature film “18 days” – official selection Cannes 2011-. Elbendary won the “Robert Bosch Film Prize” at the Berlinale talent campus 2014 for his short film “Dry hot summer” – an Egyptian German co production – the film premiered at “Clermont Ferrand ISFF 2016”, and screened after in many festivals around the world and won a number of awards.

In 2017, El Bendary released his first feature length narrative film “Ali, the Goat and Ibrahim” an Egyptian Emirati French co production, which won a best actor prize at Dubai IFF and was released in Egypt and France and many other countries, the same year; Sherif Elbendary had a TV series broadcast ed; “The Brotherhood II” written by the veteran screenwriter “Wahid Hamed”; a historical major production with political dimensions that stirred controversy at the time Elbendary participated as a jury member in several film festivals including Cairo IFF, El Gouna FF and The Egyptian National Film Festival.